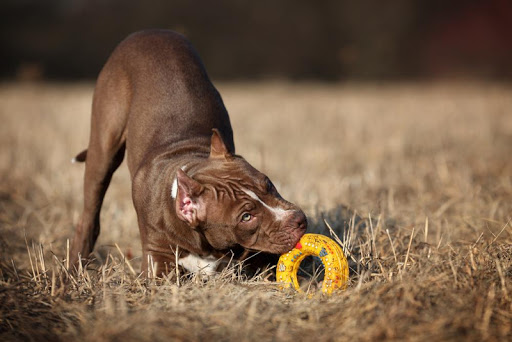 There are many “power breeds” of dogs, including the sled-pulling Husky, the brandy-toting St. Bernard (a myth), and the goofy Boxer, but when it comes to the daily news cycle, we’re mostly talking about the bull breeds (with the Pit Bull being the most common), Rottweilers, and Dobermans. These are the breeds over which a constant battle is being fought, with one side saying they are unpredictable and aggressive, and the other saying they are loving family pets who would never hurt a fly.

Our argument? We don’t have a power breeds problem. We have a people problem.

In our current high-crime environment, where people are buying dogs to protect their homes and families at increasing rates, the breeding of dogs within the power breeds can be very lucrative, with negligible regard for undesirable behavioral predispositions being passed down to the next generation of dogs.

The result is a growing population of dogs with a wide range of behavioural characteristics, and that are being increasingly trained and encouraged in a way that fosters an aggressive approach to protecting their home.

South African news media is filled with accounts of dogs mauling and often killing members of the public. In many instances, it is children who are attacked, provoking the most emotive of responses from the public (and getting the most clicks).

It can be difficult to say why exactly a dog attacks someone; it’s not that different to asking the question as to why a person attacked another person.

A dog’s genetics will, to a large extent, predispose it to behave in a certain way, but genetics alone will not drive the dog’s behaviour. Behaviour is a function of an intertwined relationship between the environment and a dog’s hereditary baggage.

An undesirable temperament because of poor genetics passed down from a profit-motivated backyard breeder, ill health, or no or little training and handling as a younger dog can all contribute to a dog that does not become appropriately adapted to being around people in social settings.

The importance of a dog’s environment means then that any dog can be dangerous in the wrong hands, and that it’s more rationale to consider the specific dog in question, vs. the dog’s breed in general.

Can you even ban a breed?

The UK’s response to dog attacks was an outright ban on keeping dangerous dogs, as defined by The Dangerous Dogs Act of 1991.

Many owners in the UK argue that a blanket ban is misguided, and that responsible ownership can lead to specific dog breeds traditionally seen as being dangerous, as actually being great pets. This call to re-evaluate the blanket ban on ‘dangerous dogs’ is even coming from places like the RSPCA, who realise that approaching the issue of dog attacks in this broad manner, is to naively suggest that some dogs are then inherently safe – which is absurd, and which can put people at risk of being attacked in the first place.

Not in my ‘Merica!

We don’t support breed-specific legislation — research shows that bans on certain types of dogs are largely ineffective and often a waste of public resources…As an alternative to breed-specific policies, the CDC recommends a community-based approach to prevent dog bites. And ultimately, we think that’s a much more promising way to build stronger communities of pets and pet owners.

Should there be any laws at all?

‘Dangerous dog’ laws that are breed-agnostic that prohibit dogs from running freely in public, do have a place in our society, as do laws requiring designed individual dogs as being dangerous to be kept on a leash. However, power breeds should be considered on their individual characteristics, and not judged based on their breed.

It’s up to owners

One hopes that common sense will rise up above the breed-shaming news articles and that the attention can be rightly focused on the dog’s owners; essentially recognizing that the problem is not as much a power breed problem as it is an irresponsible owner problem.

The responsible ownership of any dog requires a commitment on the part of the owner to socialize their dog from a young age, train it ethically and with compassion, and commit to a future of accepting accountability for the actions of their dog.

Is that even possible in a country like South Africa, or indeed anywhere in the world? We’d love to hear your thoughts on what can be done to encourage the responsible ownership of these breeds that so many of us love.

As South Africa’s Pet Insurance of choice for breeds like pit bulls and Rotties, DogSure offers unlimited benefits for all breeds and does not discriminate or exclude any hereditary any conditions from policy benefits. If you’d like to find out how a DogSure policy works, here is a great 60 second video.

You can find out more about which cookies we are using or switch them off in settings.

This website uses cookies so that we can provide you with the best user experience possible. Cookie information is stored in your browser and performs functions such as recognising you when you return to our website and helping our team to understand which sections of the website you find most interesting and useful.

Strictly Necessary Cookie should be enabled at all times so that we can save your preferences for cookie settings.

If you disable this cookie, we will not be able to save your preferences. This means that every time you visit this website you will need to enable or disable cookies again.